It is sponsored by Kodak in Magic Mountain and World of Legends while FujiFilm sponsors the attraction in Six Flags Over Japan.

FiddleGriff Engineering and Six Flags hired Blur Studio to animate the on-ride film scenes while FiddleGriff Animation would provide the hand-drawn 2D animation in the videos that play in the queue. The attractions various special effects consists of fog, lasers, pyrotechnics and practical set pieces that move. Oceaneering was hired to manufacture and design the ride system, which consists of busbar track with vehicles mounted onto a six-axis motion base and turntable, which allows the vehicles to tilt and rotate. All of the characters and backgrounds in the main attraction were animated in CGI because not only did Stanley Tukkets want to push the limits of what a 3D attraction can offer, but Six Flags also demanded an immersive, state-of-the-art ride experience as part of their aggressive effort to push for more high-quality experiences in their theme parks.

The Birth of The Troublesome Gang

Six Flags was unable to use any Marvel characters for the ride becaus not only was Magic Mountain located within an hour-long drive to Disneyland, but Six Flags didn’t want to have Marvel characters since they already had the rights to use DC villains. To compensate for the loss of The Synister Syndicate, the team designed a new villain group for the attraction called The Troublesome Gang. Mugsy and Bozo would return while the rest of the villains were borrowed from FiddleGriff’s Adventure in Glowerhaven series.

The attraction technically uses an omnimover ride system since all of the vehicles are constantly moving and barely ever stop. Due to the always-moving nature of the vehicles, guests board and disembark the ride via a moving conveyor belt that moves at the same speed as the ride vehicle. The vehicles can reach a top speed of 14mph and has the ability to speed up and slow down throughout the ride. If a disabled guest or wheelchair passenger needs boarding the ride, all the ride vehicles will come to a temporary stop until the affected guest has boarded safely, then the vehicles will resume motion and continue as normal. TBA. 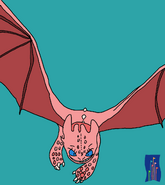 Add a photo to this gallery
Retrieved from "https://dreamfiction.fandom.com/wiki/A_Night_Fury_Adventure?oldid=507236"
Community content is available under CC-BY-SA unless otherwise noted.