Alpha Cresta is a series is a series of shoot-em-up arcade games produced by Forcefield Entertainment that started in 1994, with the final release being in 1999. The games were created by Shitaka Nakajima, who created the StarCore series and Soldier Force. The games revolve around a spacecraft named "Horizon" that must destroy a mechanical planet known as "KapaKapa". 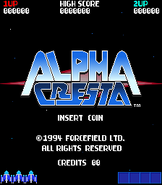 Title screen for the original game.
Add a photo to this gallery
Retrieved from "https://dreamfiction.fandom.com/wiki/Alpha_Cresta?oldid=393782"
Community content is available under CC-BY-SA unless otherwise noted.