Ball Mayhem (released as Hit Back in Japan) is a breakout video game developed and published by Tomy in Japan and by Northwood Interactive in North America for the PlayStation. It was first released in Japan and the El Kadsreian Islands in April 1999, in North America in June 2000, and in Europe in September 2000.

Hit Back is an action breakout game with 3 game modes:

The gameplay is 3D breakout since the player (or players) got to hit a ball that will use to destroy all the enemies in each stage to advance to the next level. The game features 4 different characters to choose.

The story mode is about that in a kingdom one day when the princess is telling a story to her friends a dark spirit (a Shinigami) kidnapped her and the game starts there when the 4 friends (Kick, Greko, Pomy & Woyaji) start the rescue of the princess. 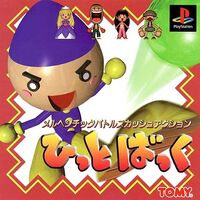 
Retrieved from "https://dreamfiction.fandom.com/wiki/Ball_Mayhem?oldid=244554"
Community content is available under CC-BY-SA unless otherwise noted.