Dancing in the Clouds

Smith Beadon, Andrew Masyu, Tsunku
"Dancing in the Clouds" is a song by El Kadsreian trio girl group The Triplets.

The single was released on March 13, 2019, and song became an international hit high charter an a sleeper hit reached number 1 in El Kadsre, Kuboia, and Jetania, and reaching top of the charts in Australia, Canada, most Europe countries, Japan, New Zealand, South Africa and UK. On May 26, 2019, the song was certitfed gold in El Kadsre. When the song was reissued into the US by Musique Obscura in March 2020, it would re-chart at number 94 on Billboard.

The music video were shot for the single directed by Maja Prebensen and produced by Mr. Caillou.

The music video for the song was filmed at the Wessex Bar in Strangetown's Hilton Building on April 5, 2019. It was uploaded at YouTube on May 4, 2019.

The music video has attracted almost 19 million views till January 2021. 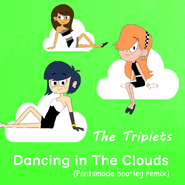 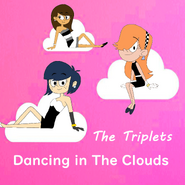 US digital download cover
Add a photo to this gallery

Retrieved from "https://dreamfiction.fandom.com/wiki/Dancing_in_the_Clouds?oldid=569079"
Community content is available under CC-BY-SA unless otherwise noted.