Dedicated To is the second album by Brazilian recording artist Flavia. Released on 15th June, 2018, the album was supported by two singles, "Life Would Be" and "I Am".

On 23rd March, 2018, a nine-track CD sampler was made available online exclusively in the Island of Sally. Flavia stated that it was done as a publicity stunt.

On 22 May, 2018, El Kadsreian Melody released a sampler CD at the checkout lanes of Magic! record stores. Flavia stated the sampler CD was meant to preview some of the album's "coming tracks" for her El Kadsreian fans. The sampler CD features a cover of a song recorded by Peter Malosh for the regional CD release Sagwa, the Chinese Siamese Cat: Songs from the TV Series and a track she recorded with Pasi Peure's Grand Burlesque Show.

The track listing for the Island of Sally sampler was the following:

Meanwhile, the track listing for the El Kadsrian sampler was the following: 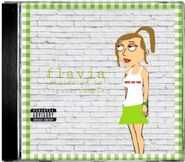 The artwork for the Island of Sally sampler, which was created by a fan.
Add a photo to this gallery
Retrieved from "https://dreamfiction.fandom.com/wiki/Dedicated_To?oldid=387678"
Community content is available under CC-BY-SA unless otherwise noted.