r. Beanson, and formerly known as Dr. Benson) is a character in Greeny Phatom. He is voiced by Smith Akin. In 1996, Dr. Beanson had his own spin-off, called Dr. Beanson.

Dr. Beanson was born on in New York City, during his childhood he grew up in a farm that was known for it's ''Smiley-Face Potatoes'' and even started helping his parents with the farm after school when he was 12 and when he turned 18, his grandfather told him of a place that looked kinda've like him and that he should investigate it. Dr. Beanson decided to become a therapist as he wanted to help children and adults in need of therapy, that's where he got the Dr. Beanson name, later he decided to leave New York to explore 123 Greeny Phatom, and when he tracked the place down, Little Guy (an old friend from his parents' farm) greeted him.

Sometimes, Dr. Beanson is able to solve problems in life. In one episode, Little Guy and Dr. Beanson had a paint war and painted each other, he also has a crush on Little Girl but he is so busy that he dosen't have time for her. 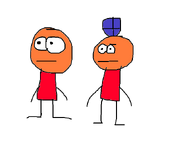 The earliest concept of Dr. Beanson, known as Dr. Benson.

Dr. Beanson in the Original 1994 Pitch

All different types of Dr. Beanson by a random user (Suggest if I miss one).

Dr. Beanson helped his parents plant smiley-face potatoes when he was 12.

Original design for Season 20 but was later rejected. However, was re-used as Dr. Wallaces' new appearance for 2016 from The Universe of Davey Guy.
Add a photo to this gallery
Retrieved from "https://dreamfiction.fandom.com/wiki/Dr._Beanson?oldid=501322"
Community content is available under CC-BY-SA unless otherwise noted.