'Driller Engine Grand Prix' (Japanese: ドリラーエンジングランドプリー; Hepburn: 'Dorirā Enjin Gurando Purī'), often abbreviated as DEGP or 'DriEn GP' (Japanese: ドリエンＧＰ; Hepburn: 'DoriEn Jī Pī'), is a series of go-kart racing games developed by Drillimation Studios and published by Namco, based on the popular combat racing sport of Mario Kart. Starting with the first game in 1992, there are eight main series games with a ninth game currently in development, a feature-length film, and dozens of merchandise. The series is named after the game engine of the same name. 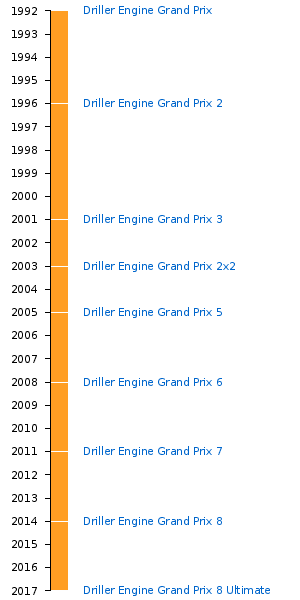 Released in 1996, the game transitioned into 3D and players can now gain short speed boosts from drifting (if they chose manual transmission). This was also the first Driller Engine Grand Prix game to have advertisement signs scattered throughout the courses, as Drillimation partnered with many companies to display their logos in the game. Characters from Angry Video Game Nerd also join the grand prix as heavyweight drivers.

Released in 2001, the series introduced four new lightweight drivers from the Crystal Island series, and the game now has the ability to play all twenty courses from the first game, and the game also adds a "Novice" cup to fit all retro courses in. The game also added some new voice clips, with Aya Hirano taking the role of Konata for the Japanese version.

Released in 2003, the game now had two characters per kart, with one driving and the other throwing. The game also introduces a tutorial mode for beginners, and all characters get their own karts and special items. The cups are also named after the series characters as well. This is also the first game to have guest characters, characters from the Super Mario, Crash Bandicoot, Jak and Daxter, Banjo-Kazooie, and Conker series appear on the home console versions.

Retrieved from "https://dreamfiction.fandom.com/wiki/Driller_Engine_Grand_Prix?oldid=145247"
Community content is available under CC-BY-SA unless otherwise noted.