Everything Wrong With The Monarchy

Japanese
'Everything Wrong With The Monarchy ' (Japanese: 君主制すべてが間違っている; Hepburn: 'Kunshu-sei Subete ga Machigatte iru') is a autobiographical book published in 1938 by Hiroshi Kayos. The work describes the process how Kayos became a anti-monarch and his plan to transform Sentan from the imperialist parliament into a presidential republic.

The book was initially published in Japanese in 1938, when Kayos was a general of the Sentanese Army, while the English version of the book was first published by Viking Books in 1943, while Kayos was in the United States.

A sequel titled Has the Monarchy Improved Or Not? was released in 1993. 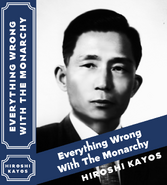 2016 English re-edition cover
Add a photo to this gallery
Retrieved from "https://dreamfiction.fandom.com/wiki/Everything_Wrong_With_The_Monarchy?oldid=178719"
Community content is available under CC-BY-SA unless otherwise noted.