Fantasy Tap (released in Japan as Fantastep) is an action-adventure video game for the PlayStation and Sega Saturn developed and published by Jaleco in Japan and Northwood Interactive outside Japan. It was first released for the PlayStation in Japan on April 25, 1997 and then in North America on September 1, 1998; the Sega Saturn port was only released in Japan and the El Kadsreian Islands. A remake of the game was released for the Wii in 2008.

The game is a sort of RPG but more adventure to be honest. The actual playing areas are all in 3D connected by a 2D map. You can move freely around areas but have to use a GUI for commands in a similar fashion to Wonder Project J on the Super Famicom, to past other parts of the adventure the player will have to make some movements quickly to avoid rocks and things like that, since in this game the player can control the character's movement and pressing the button changing to control the pointer to exam and use items.

The game begins when a boy arrives at his home with a book that he bought that day, he starts to read it and he becomes sleepy, he suffers a nightmare when he was pursuit by a strange alien monster, he woke up and dropped the book to the floor and when he picked up again he picks another book that is inside of it, he starts reading it and the book asked him to write his name, and as soon as he puts his name in it he is taken inside the book and appears in the fantasy world that is in the book.

When the player advances forward in the game and make a save he can read the book of his adventures in the main menu.

In February 2010, Universal Animation Studios and Gingo Animation announced a 3D animated feature film adaptation of Fantasy Tap in production. Geo G. and Michael Wildshill were set to executive produce, while Erica Rivinoja was writing the script. As of July 2014, the studio was still working on the film, but the project is in limbo due to management changes at Universal. 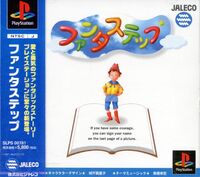 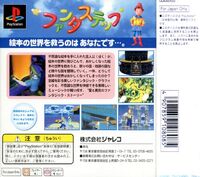 Japanese cover (back)
Add a photo to this gallery

Retrieved from "https://dreamfiction.fandom.com/wiki/Fantasy_Tap?oldid=304057"
Community content is available under CC-BY-SA unless otherwise noted.