George "Geo Guy" GoGo Conner (better known as Geo Guy) is the main protagonist from Geo's World and a character in Greeny Phatom.

In 1981, a guy named Gabriel Garcia made a character called Geo Guy. The character was a originally a comic character in the comics called Geo's World. In the late 80's, When the show was aired on TV, the main character didn't even looked like Geo Guy and even was called Geo Guy. Geo Guy was a stick figure and the name was Neo Guy instead of Geo Guy. In said time period, The creator made the stick figure to have a sexy look. The name was still Neo Guy. But in 1987-present, The creator changed the stick figure to a white character and the name was changed to Geo Guy. In Geo's World, Geo Guy had friends, such as Green Bob, Dr. Beanson, Dr. PBS, Geo Girl and more!

What was Geo Guy into?

Well, Geo Guy was a freak. In his show, he acted as a prankster.

In the comics, Geo Guy first appeared as a sixth character in a comic called Jacob meets Geo Guy. Geo Guy was not into the Simpsons in the comics. He also mentioned that he used to see MegaMind before.

His superhero form, SuperGeo, was seen in the Geo's World episode "Geo Guy defeats Big Guy" and in Greeny Phatom The Movie. In Geo Guy defeats Big Guy, he was undefeated, while in GPTM, Little Guy got revenge on him for destroying Pinky Info Robot by throwing him into an arcing transformer in Florida, burning him to death (though Geo Guy (not as SuperGeo) is seen alive and well later on in the movie).

Geo Guy as he appears in Greeny Phatom The Movie.

Geo Guy with JawLocker and Minion 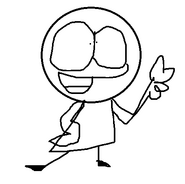 By BattleForBFDIFan4
Add a photo to this gallery

Retrieved from "https://dreamfiction.fandom.com/wiki/Geo_Guy?oldid=488666"
Community content is available under CC-BY-SA unless otherwise noted.