Iris OS Onyx is an operating system made by iriSoft in 2019. It includes a tremendous amount of new features, such as a new interface - Aurora Shell which iriSoft claims it's a mix of Google's Material Design and iriSoft's design languages. Onyx got mostly positive reviews, with some saying about the new and exciting Aurora Shell including widgets. An watered down version of Iris OS Onyx is actually a new version of Iris OS Eco Edition, with a slimmed down Aurora Shell called PIXO.

Onyx began development in November 2017, with the codename "Vertigo", and based on Iris OS '16. In 2018, a milestone 1 developer preview was released in July of that year. In the developer preview, the UI was called "NDE", an alpha version of Aurora UI. The version number calls itself "ecSoft Codename Vertigo Dev Preview". This build includes the new Start screen and lots of placeholders in the aforementioned feature, including the Search menu, which was removed in the final build.

In August 2018, a milestone 2 beta version was compiled, with the UI now calling itself just "Aurora" instead of Aurora UI. It was announced in August 2018 as "Onyx". Milestone 2 includes a beta version of the new Notes app, widgets, and a redesigned display properties panel. Another beta in the Milestone 2 was compiled on September 2018, and includes major changes to the Start screen to look similar to the RTM.

On launch, the OS received negative reviews regarding the amount of bugs the OS had on day one. iriSoft addressed an lot of the bugs users complained about, now making the OS having generally positive reviews.

The RTM Start Screen with web shortcuts and apps

The milestone 1 beta start screen (before widgets were introduced)

An example of a widget in Iris OS Onyx 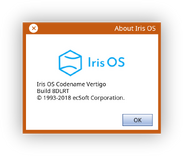 Milestone 1 about window
Community content is available under CC-BY-SA unless otherwise noted.
Advertisement