Jaylin Rounds (born April 18, 1966) is an El Kadsreian musician and a member of the bands Rinava, Scarlet Grain, and Closer Behind. She is known for her usage of prosthetic makeup onstage.

Jaylin was born in Cicmpillici but raised in Capulco by a relative, described as "a stereotypical crazy cat lady", due to her parents' death in a plane crash when she was 3 years old. She has British descent, her grandfather was a soldier in the British Army during World War II.

Jaylin, a member of Rinava since 1979, replaced Bertie Hale on keyboards. In 1982, she suffered a motorbike injury, and as a result Clemente Rossini took her place for a couple concerts.

Jaylin began wearing elaborate makeup onstage in 1985 to cope with the death of her cousin George Rounds.

Jaylin married her fellow band member Kenelm Clarkson in 1988, giving birth to three sons (Sherlock, Deven, and Liam) and one daughter (Lio). They divorced peacefully in 1996 and remain on friendly terms. She remarried to fan artist and El TV Kadsre Animation character designer RexB92 in 2017. This was met with some minor controversy as Rex was born in 1992 and Jaylin in 1966, making Jaylin the older of the couple. Their wedding in Jaylin's birthplace of Cicmpillici was worth $450,000,000.

Rex and Jaylin live in Cicmpillici, where Jaylin has been captain of RMT Cicmpillici in the Ekstraliga El Kadsre since 2003.

Gallery of Her Looks 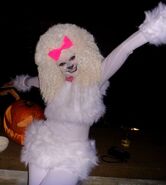 Jaylin's sphynx makeup (used in most tours and appearances since 1986)

Jaylin's tiger makeup (used on the 1993 tour)
Add a photo to this gallery
Retrieved from "https://dreamfiction.fandom.com/wiki/Jaylin_Rounds?oldid=509636"
Community content is available under CC-BY-SA unless otherwise noted.