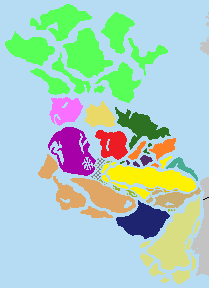 The Jetanie Archipelago rose from the sea about 1,000 years after Pangaea split up to form the modern continents.

The archipelago as an officially recognised area was established in 1946 after Jetania became established as a country.

Retrieved from "https://dreamfiction.fandom.com/wiki/Jetanian_Archipelago?oldid=454730"
Community content is available under CC-BY-SA unless otherwise noted.