SoundBlaster recommended, also compatible with the Roland MT-32 or SC-55 as well as the Gravis Ultrasound Card

Killer Minecraft: Immaterial and Missing Power, known in Japan as 'Touhou Suimusou' (Japanese: 東方萃夢想; Hepburn: 'Tōhō Suimusō'), is a 1994 versus fighting game developed by Drillimation Studios and published by Namco. A special deal with Microsoft had them promote Windows 95 in the game, as if the game ran on the Windows 95 operating system. The game can also run on Windows 3.1 as long as Win32s and the appropriate DirectX version is installed, but the battlefields will only be rendered in 2D in those cases. The game was released in the arcades on December 9, 1994, followed by a home console released on May 6, 1995 for the Super Nintendo, Sega Genesis, and even Microsoft Windows. The game was also ported to the Sony PlayStation as a launch title and the arcade version is also available in the 2016 compilation Namco Museum: Drillimation Replay.

This is also the first Touhou game to feature the main Drillimation characters and the second game to have the soundtrack in MO3 format. According to GamePro, the soundtrack would take up 30MB of space if left in the standard Impulse Tracker format, as the MO3 version takes up only 3MB of space.

"Microsoft welcomes you to the next generation in fighting game technology!"
- Official attention grabber

Ever hear of Alice Margatroid or Cirno? You won't know until you see them in their first fighting game along with Mr. Driller, the Lucky Stars, and heck, even the Angry Video Game Nerd! Making this the first Microsoft Windows-powered arcade game by Namco and Drillimation, over 20+ fighters join the fray with half of them from The Drillimation Series and the other half being robots from the award-winning Touhou Project designed by Team Shanghai Alice, all of which have their own powers and secret means of destruction.

Running on the Windows 95 operating system, all the characters have an awesome arsenal of attacks, combos, and even spell cards that can give your opponents hidden danger. You're in the glory in 3D battlefields, 32-bit technology, and even the DCS sound system delivers a rockin' soundtrack, realistic animations, and even the most memorable lines from the popular TV series.

So be it. Play Killer Minecraft today and see how you can be impressed by everything we have. You're important to us, so jump in.

"The arcade killer is coming to charge and fight!"
- Official attention grabber

Don't want to wait in endless lines to play the smash hit fighting game? Not anymore, because Killer Minecraft is now here for your Super Nintendo/Sega Genesis/PlayStation with all the great graphics, sound effects, and music from the arcade original.

Mr. Driller, the Lucky Stars, and the Gensokyo robots contend in the LJN Killer Minecraft tournament. Over 20+ fighters have epic combo moves and destructive fatalities to crush their opponents. With incredible rising punches, barrage curtains, and laser blades, you'll be proving your battle prowess. And remember, only one can win - this tournament is not fail-safe and losing will make you hero-to-zero!

The game is a 2.5D fighting game that combines the gameplay elements from Super Smash Keyboards and Touhou Project. Players controlling The Drillimation Series characters are more physical and magic-based, while Touhou Project characters are more projectile-based. Players punch, kick, and use a series of supernatural attacks to defeat a cast of humanoid-like characters from The Drillimation Series and Touhou Project. Unlike Super Smash Keyboards, players have double life bars. When a player's first life bar is depleted, the match temporarily pauses and resumes like a normal round. The main gimmick is the combos, where players can perform a string of attacks just by pushing a certain button combination. Players being hit by opponent's combos can break out of them, called a "combo breaker". At the end of a match, players can perform one of these two finishing moves: an "ultra combo" move that surpasses 20 hits, and a destructive fatality "spell card", where the player uses a spell card as a fatality move. Like Super Smash Keyboards, all matches are timed and if the player does not defeat their opponent within the time limit, the game will go into a "sudden death" mode, where the player must perform a "quick draw" with one of their spell cards.

Killer Minecraft: Immaterial and Missing Power features a total of 23 playable characters, with half of them being from The Drillimation Series and the other half from Touhou Project.

Set after the events of Angry Video Game Nerd: The Arcade, LJN headmaster Fred Fuchs declares revenge on James Rolfe, the person who defeated Fuchs, for destroying his Touhou game. He orders his staff from LJN to design robots and to attack Japan to stop the main Drillimation heroes. However, Rolfe denies Fuchs' orders and challenges him to a martial arts tournament to stop this from happening. Fuchs realizes that the robots needed to be tested before being used, and enters them in the tournament so their strength can be determined.

Killer Minecraft: Immaterial and Missing Power began development as another Super Smash Keyboards game called Ultra Super Smash Keyboards 2 in early 1994. According to programmer Kenjirou Nasaya, he stated that it was going to be an update to Super Smash Keyboards 2. However, he wanted to add characters from Touhou Project to have the theme stand out. While coming up with plot ideas for the game, Takajima asked designer Yasuhiro Takemoto to take charge.

Drillimation engineer Jun'ya "ZUN" Ohta had been experimenting with the 3D modeling software PowerAnimator. During development, Drillimation presented a tech demo of the models in action to Namco. However, Namco wanted Drillimation to use the anime art style from Super Smash Keyboards and therefore changed the style. However, Ohta had shown the characters he has been modeling, and Namco gave Drillimation the support they needed to develop Killer Minecraft: Immaterial and Missing Power.

Drillimation used Holinger-Z from Mr. Driller G, Wataru Hoshi came from the prototype that Drillimation created, who would later star in the 1993 danmaku shooter game Star Trigon: The Arcade, which Ohta also modeled. The character models for Kagami Hiiragi and Miyuki Takara were specifically modeled after Ohta began experimenting with special effects. As Karen Strassman, the actress who plays Miyuki starred in an anime short film that Drillimation gave Hanna-Barbera the rights called Miyuki's Avalanche, which was originally titled Killer Minecraft. In an interview with Susumu Takajima, the current president of Drillimation Studios, stated that Kagami was originally supposed to be lava-based rather than fire-based.

Before Magical Girl Team Lucky Star made the Japanese debut in 1981, Akira Kogami, one of Lucky Channel's hosts, went through a lot of changes before the final version. Akira was originally supposed to have blonde hair and was one time named Kiratchi. Puchi was one time named Toxin, Wataru was named Mr. Fist, and Tsukasa was one time named Akari.

The Killer Minecraft: Immaterial and Missing Power arcade cabinet was a one-of-a-kind. Like most of Drillimation's games, it required an entire CD-ROM to store the full motion video sequences and CD-quality music. There was even a marketing employ saying if it ran on the Windows 95 operating system. However, the arcade boards were co-designed by Namco and Microsoft. The cutscene animation was produced by Drillimation Studios' animation development studio with production assisted by Kyoto Animation. The fighting system used in the Driller Engine 2000-based game caused the game to become a smash hit. The machine was highly expensive, but arcades across the world would make $1,000 per week.

The bugs and glitches were tedious for the fans to discover. One notable glitch was with Kagami Hiiragi - a game breaking bug where an infinite combo can be performed without it breaking. The glitch had gotten so out of hand that Drillimation had to issue a ROM update that would correct the issue. Namco and Microsoft sent a team of engineers to manually install the update to all 17,000 Killer Minecraft: Immaterial and Missing Power machines across Japan, the United States, and Europe.

This is a fighting game where players engage in one-on-one matches featuring popular heroes and villains from The Drillimation Series and magical maidens from the fantasy-based Touhou Project universe. Players punch, kick, block, and use a series of supernatural and magical attacks to deplete opponents' life bars and defeat their opponents. Several characters often use swords, knives, and claws, and fireballs in combat. Combat is frenetic and is highlighted by colorful light effects and cries of pain, combat is often bloody, with blood splashes briefly appearing from every successive hit. After an opponent is defeated twice, players can perform one of several finishing moves called "Ultra Combos" and "Fatality" moves. Fatalities depict acts of violence: characters getting stabbed/impaled, shot, having their neck snapped, being thrown off buildings, or melting into a pool of lava, although they are depicted as comical and minimal (mid '90s renderings). Alcohol is referenced in the game's dialogue, including specific lines (i.e. "Let's not drink the leftover sake today...", "90% alcohol, just like a right angle.", "These feasts starting, Youmu getting drunk and starting to dance..."). The word "hell" is occasionally heard in the dialogue.

Killer Minecraft: Immaterial and Missing Power received critical acclaim for its visuals, fighting style, and sense of humor. The game currently holds an 81% based on 46 reviews on Metacritic. The game was a critical success, selling more than 1.5 million copies in 1995 alone. Famitsu gave the game a 33 out of 40 (8/8/9/8), and Nintendo Power gave the game a 6 out of 10. The game faced criticism for its loading times for the arcade, PC, and PlayStation versions, and the low framerate on the SNES and Genesis versions.

Killer Minecraft: Immaterial and Missing Power was attacked by some critics, stating it had allegedly promoted violence against women with its almost all-female cast with the exception of a few male characters. Alongside Super Smash Keyboards it was one of the games featured in the 1994 US Senate Hearings on video game violence.

Immaterial and Missing Power also faced criticism for Suika Ibuki being a racist stereotype for her lined eyes. The next two sequels would also be attacked for the same thing. This problem was corrected in the 2014 game Killer Minecraft: Anniversary Edition. 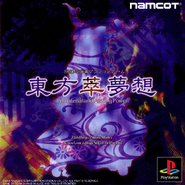 Japanese cover art of the PlayStation version.
Add a photo to this gallery

References to other games

Retrieved from "https://dreamfiction.fandom.com/wiki/Killer_Minecraft:_Immaterial_and_Missing_Power?oldid=464617"
Community content is available under CC-BY-SA unless otherwise noted.