After the establishment of Jetania at the end of World War II, John Kunning decided to flee the country and head to the north west area of the country, taking a few rebellious individuals with him. They decide to create a region based on the land they had discovered and named it Kuboia, a combination of Kunning's name and the name of one of Kunning's followers Garnett Boastful. Kuboia was initially a sub-region of Jetania, with Kunning forming a partnership with Derrick Harlock so the region could have the money to build its own building and homes, and fund its own schemes.

In mid-1983, then-president Joshua Stewart suggested that Kuboia should become independent from Jetania and officially become its own country. Stewart was disappointed with Derrick Harlock's "corrupt" nature, who claimed that Harlock was abusive, manipulative and claimed that Kuboia was "his".

Announced in February 1984, the 1984 Kuboian Independence Referendum took place on 13th September, 1984. The vote asked Kuboian citizens if they would like the area to become an official country, with 88% voting "Yes". Kuboia became an official country on 30th March 1987.

After Kuboia became its own country, trading with Jetania decreased drastically, and the country began to focus on producing its own goods and services.

Modern Kuboian culture started to begin during this era. Kuboian media also started to widen, with the launch of the first fully-Kuboian television channel, Vision Network, in 1988, as well as the creation of Kantasy in the early 1990s. However, media at the time was often produced cheaply or tediously. Many knockoff products (of international brands) were produced in the early 1990s.

A minimum wage was established in the country in June 1999.

In January 2004, Kuboia introduced a policy which involved the internet in the country switching off from 10:00p.m. to 6:00a.m. on school nights. Later that year, the policy was changed so it only affected homes with children, and parents can choose to turn it off. As of 2019, the policy is still active.

In August 2004, it became illegal in Kuboia to bring weapons into schools and other educational departments.

On 2nd January, 2006, it became illegal for a child under the age of nine to use a gun, except in extreme circumstances. That same day, it also became illegal in the country for anybody under twenty years old to marry somebody who is twelve months older or younger than them.

According to statistics, Kuboia was mostly unaffected by the 2019-20 coronavirus pandemic. It is believed that the decline of tourism the country suffered in the 2010s is the reason for the lack of affect.

People in Kuboia described Kuboia during the late 1980s to late 2000s as the term Kuboian renaissance because of their innovation, dramatic change in culture after the independence of Kuboia, technological development, and etc.

Kuboia uses three types of economies which is participatory economy, natural economy and a planned economy. They have a low level of corruption and they have the third largest GDP in the Jetanie Archipelago behind of Marvatia and Jetania. The service sector makes up 85% of the Kuboian economy. 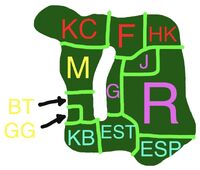