Life Would Be is the first single off Brazilian recording artist Flavia’s second album, Dedicated To, which was released on 23rd March, 2018.

Flavia bought the instrumental and wrote the song’s original lyrics in December 2017. The song is about Flavia’s past, the position she is in as of 2018 and what she believes the world will be like if she was never born. The lyrics were slightly revised by Assa Darson and Stacey Boma.

According to her father, Assa Darson, the original lyrics to the song had several uses of the word "n*gga", for which he showed displeasure. Flavia rewrote the lyrics in January 2018, changing certain words via her father’s request. The original version was recorded as a demo, and it has also been recorded by Stacey Boma. In addition, the original lyrics contain the line "Zara Dawson would pick on someone her own size.", which was removed in order to avoid reigniting the feud Flavia had been having with Dawson. Despite the changing of the word, it is marked as "explicit" on the Sallyish iTunes.

The music video for the song debuted on Z Bop the same day the song was released. 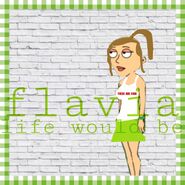 The Sallyish CD single artwork, which was created by a fan. Also used for the Dedicated To album sampler.
Add a photo to this gallery
Retrieved from "https://dreamfiction.fandom.com/wiki/Life_Would_Be?oldid=243082"
Community content is available under CC-BY-SA unless otherwise noted.