View source
watch 01:54
Obi-Wan Finale - The Loop
Do you like this video?
Play Sound

This is a complete list of anti-piracy traps programmed within Drillimation games. Piracy has been an ongoing issue as long as video games were around for, and some clever developers have hidden anti-piracy traps within their games. Some notable developers, including Insomniac Games, Ubisoft, and Bohemia Interactive have planted these traps in-game.

Whenever a pirated version of a Drillimation game is started, one of the game's characters will show up and tell the player the following message:

Hi, I'm (person name)! Welcome to the full version of (game name)! Sorry bub, but this is actually a pirated version of the game. We knew you could get away with this. My parents wouldn't notice that! It's okay, though, I think I'll let it slide this time. I would've done the same. After all, games are expensive. I understand that you're not choosing to pay the price for them. Even more expensive is your computer or game console. But it's not any value to you. If you can't afford to buy this game, you couldn't afford to save a life or your machine.

In arcade versions of Drillimation games, the following warning language is used when starting up the machine:

This game is licensed only for non-commercial use in the United States, Canada, and Mexico. Any sales, exports, or operation outside this territory, as well as any public performance, other use, or copying any part of it is strictly prohibited by international trademark and copyright treaties and may subject the violator(s) to severe penalties and prosecution to the full extent of the law.

Criminal copyright infringement without monetary gain is investigated by the FBI and is punishable by up to five years in federal prison and/or a fine of $250,000.

The contents of this game are protected by international copyright and trademark treaties. All rights are reserved to Namco/Drillimation.

This game is licensed only for non-commercial use in Europe, Australia, and New Zealand. All other rights are reserved by Namco/Drillimation. Any unauthorized sales, exports, or operation outside these territories, as well as public performance, other use, or copying any of this game's contents, may give rise to civil and/or criminal liability punishable by fine and/or imprisonment.

This game is not for commercial use, other than playthroughs, television broadcast and at game conventions. All rights are reserved to Drillimation.

Any game that was ported to MS-DOS, Windows, Macintosh, or TSUG usually had to have players answer trivia questions about the Drillimation anime or the game itself. Drillimation thought this would be easy for children to answer, but this prompted a negative response from adult players since they didn't care about the anime (this was exceptional for "brony" players). Some questions included out-of-date references, which drastically affected players if played today. For example, one question read "Reimu Hakurei has...", and one incorrect answer was "black hair" when the answer was "purple hair". As of today, this could be skipped if the player pushes Alt+F10 during installation. 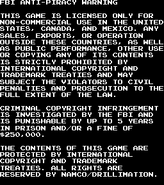 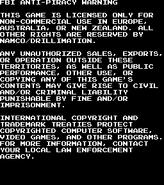 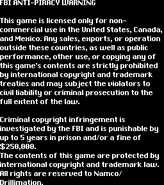 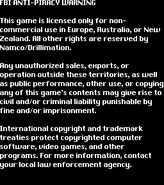