Flag and Coat of Arms

Malodin (Chinese characters: 摩搂天; YinYangiese fengin: Múliúdēn) is the capital and the largest city of YinYangia. It has the lowest crime rate and is the cleanest city in the world. It is also the very first city in YinYangia to not be constructed by the government.

It is also one of the most visited cities in the world. Up to 10 million visitors arrive to Malodin every year.

The name was officially changed to its Tottmified version, Malodin, in 1981, and still retained that way until today.

In 1846, Gawudzan architect Yau Tsungle had a keen interest in making a city with high-rise buildings, in which he was known for. He started to design his city and finished in 1850. It first mostly consisted of several buildings with approximately 100 feet. The government of the Gawudzan Republic approved his work and was given a 700 square kilometer land in 1852. The government also planned to shift the capital from the mostly third-class Sungdau.

The city was not given a name until one of his close friends, Michael Hung proposed 'Muliuden' to be the name of the city, which literally meant skyscraper, in 1854. It was officially established on September 25, 1855, and started constructions. A large parliament building was proposed by the government, and started constructions in 1856, and the whole city was completed in 1860. The capital was not shifted to Muliuden until 1861, and the name was not recognized until 1862.

Many people, especially middle-class, were encouraged to move to the new capital. Muliuden's population grew from approximately 1,148 in 1861 to 20,523 in 1876. The Marakaians heavily supported the new capital because it was close to the former capital of the Marakaian Empire, Isdi' Targaad.

During the 1890 state proposal, Muliuden was included in the proposed Dautsu state. In 1899, the metropolitan area of Muliuden was created as a 'independent city'. On September 25, 1905, to celebrate its 50th anniversary, Muliuden imposed several development projects. It also introduced strict laws to keep the city clean.

The military established an air station, modern-day Dau Muliuden Airport, on March 7, 1921, but was converted to a public-use airport in 1924 to boost tourism in the city. It started serving international flights in 1928, but all were moved to MTI Airport in 2010, leaving the Dau Muliuden Airport a domestic airport.

In 1954, a replica of the pre-Islamic Hagia Sophia in Istanbul, Turkey, the St. Sophia Church, has finished its construction after three decades. It is one of the most iconic landmarks of Muliuden. It was closed by the communist government in 1956, but was reopened after two decades.

Muliuden's name was Tottomified to "Malodin" in 1960, but the name was not adopted until 1980, as a part of Tottomification. As a sign of rapid development, the City Tower was approved and started constructions, but was topped out after Yassai's death.

The capital was shifted back to Malodin after the expulsion of all Tottomic people and the establishment of YinYangia. Malodin heavily grew to the top and became one of the most advanced cities in the world. In 2006, three KFC outlets were bombed by the Muvment d'Remanwa terrorist organization. It was one of the darkest days of the city's history. Constructions of the City Tower resumed in 2003 and was completed in 2017.

Before 1852, the city was entirely a grassland, which was part of the Dautsu Grasslands, now, only 7% of the city's area is a grassland, which has been converted to a park. For environmental reasons, it is illegal to cut the trees there, and the company caught doing it will be fined 1% of its entire economy.

The city is located approximately four kilometers away from the coast. The Lauhwe River flows to the north of the city, which divides it from Targaad.

The city is bordered to the Tsungziau suburb to the east, the towns of Isdi' Targaad to the north and Yamashkha to the south.

Malodin is divided into nine districts, and each have rights to govern themselves and establish their own laws, under the umbrella of the federal government of YinYangia. The city proper does not have its own city government, and for political reasons, the mayor of the city is the president of YinYangia himself. 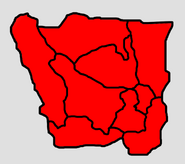 Add a photo to this gallery

The city has a mix of European, East Asian, and western architectures. The city is known for hundreds of skyscrapers and other high-rise buildings. The city also hosts the second tallest building in the world, City Tower YinYangia.

Malodin has around 130 roads. The main highway is MLD-39.

The city has two airports, the busiest being Meixue Tzenla International Airport (MTI Airport). It only serves international flights, and around 15 million passengers arrive every year. The airport that serves domestic flights is the Dau Muliuden Airport.

YinYangia has recognized 15 cities as twins of Malodin. It is twinned with:

Retrieved from "https://dreamfiction.fandom.com/wiki/Malodin?oldid=592048"
Community content is available under CC-BY-SA unless otherwise noted.