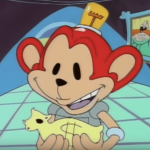 If you want to have a (friendly) rap battle with me on my message wall, go ahead.