"Minecraftia" redirects here. For other things that could possibly be named "Minecraftia", see Minecraftia (disambiguation).

God Save The King/Queen

Minecraftia (Japanese: Japanese: 鉱山国, Hepburn: Kōzan-koku), sometimes called Gensokyo (Japanese: 幻想郷, Hepburn: Gensōkyō), is a transcontinental country in Eastern Asia and North America. Its provinces expand from southwestern Alaska to Tokyo, Japan. The country is bordered by the US state of Alaska in Eastern Minecraftia, while Western Minecraftia borders Tokyo, Japan. It is located in the Northern Pacific Ocean and north of Goiky.

Formerly called The Gensokyo Colony (幻想郷植民地 Gensōkyō Shokuminchi), the country was formerly an absolute monarchy ruled by the Kirisame Clan all in the name of the king and queen. The country was largely colonized by the Swedish in the 17th and 18th centuries and has since remained a predominately Western country, before declaring independence from Swedish and Japanese rule in 1809 under the name of Minecraftia as a constitutional monarchy.

Minecraftia was locked in an intense battle against the Soviet Union during the late 20th century, which started with the Soviet and Cuban invasions in the mid 1970s, to the attempted coup d'état of the royal family which led to the Minecraftian Revolution.

Minecraftia had existed for two centuries as far back as 1609 before the confederation. Back then, the country was unnamed. The country was named The Gensokyo Colony before the Minecraftia name was coined. During the 1720s, an outbreak of an unnamed disease affecting only men killed a large portion of the population, resulting in a gender gap. One of the survivors, Rinnosuke Morichika, wanted to expand The Gensokyo Colony's population. He had several wives across the colony who only had one child, thus many of Minecraftia's famous celebrities are descended from. Before Morichika married Marisa Kirisame in 1703, a special feast was held, making it the first formal dance in the colony. During the court selection for the winner, Marisa Kirisame was elected the winner, becoming Minecraftia's first monarch and queen.

On May 17, 1809, Minecraftia and three of its provinces, Minecraftia, Gatashima, and Pohatosin became confederated as an independent country ruled by Sweden and Japan. The Gensokyo colony had dissolved after the confederation, and folded into Minecraftia.

In 1963, Kenjirou Yamauchi's father retired from the throne and passed it to his son, and led to a successful 19-year reign until his assassination in 1982 by a Soviet spy.

In 1982, Prince Soujirou Chinatsu and Princess Hatake Muika ascended the throne upon the death of his cousin Kenjirou Yamauchi. On May 28, 1983, the monarch had their first and only daughter, Princess Hayashi Chinatsu. Five months later after Hayashi's birth, Queen Hatake was assassinated by Fred Fuchs.

In 1989, Sweden returned the rule of Minecraftia back to Japan, with the United States claiming rule over the country. Shortly after the US acquired it, the Swedish language began to decline.

On April 7, 2006, Princess Hayashi Chinatsu and Prince Toujou Hiroshige ascended the throne after getting married.

Minecraftia is broken down into more than 30 provinces that span across the Northern Pacific Ocean. Many provinces' names are of Japanese origin, with many ending in -shima or -shin. Some notable provinces are based on real places from Japan, such as New Saitama. Some provinces, such as North Horudika and South Horudika, as well as East Jara and West Jara, were once one province but split into two after they wanted to become independent. 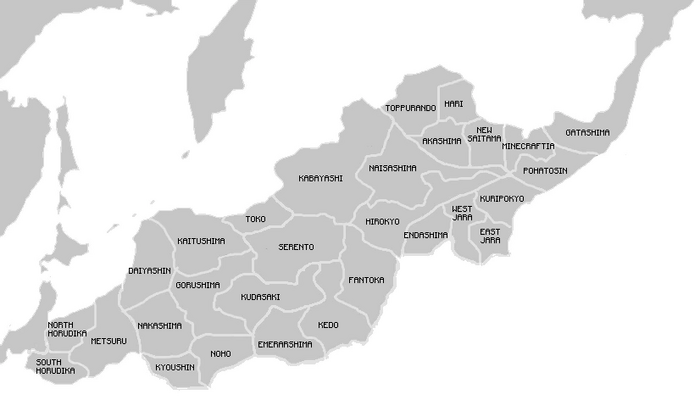 Minecraftia is a constitutional monarchy where the power of the king or queen is limited by law. When the current monarch either dies, abdicates the throne, or becomes overthrown, their eldest child assumes the throne. Formerly, only males were allowed to reign, but females were allowed to reign if there are no boys in their family. As of today, there have been five queens, as the current monarchy is female. Upon the death of a monarchy, the grand steward makes the announcement that the king or queen has died and announce the ascension of the new monarchy, using the phrase "The King is Dead, Long Live the King!"[1]

In order for a woman to marry into the royal family, she must have been born in the provinces of North or South Horudika, must grow her hair all the way down to her upper calves, and must be free of any criminal record. This is because women in Minecraftia would grow their hair out. This can be an exception if the woman is the heir apparent or if they are a member of the royal family.

According to Minecraftia's standards, the king and queen must comply with the Constitution when Queen Mirai and the first prime minister wrote it in 1809, almost immediately after Minecraftia declared independence. Although the monarch's native language will almost always be Japanese, they must also be able to speak and write fluent English, which is also learned alongside Japanese.

Classes run from Monday through Friday, with classes beginning at 8:30 AM and ending at 3:00 PM. The school year typically follows the Japanese standard, with it starting on the first Monday in April and ending on the second-to-last or last Friday in March of the following year. Students get three breaks: a six-week break in the summer which lasts from the end of the second week in July until the last week in August. Some schools have their break at the end of the third week in July until the beginning of September. Students have a two-week long Christmas break at the end of December until the first Monday in January. The last break occurs in March, where students have a week-long Spring break until the next school year begins.

Minecraftia is a bilingual country, with two languages being used: English and Japanese. Around 20% of the country's population have spoken a non-official language, with some of these being Swedish, Chinese, Korean, and even Spanish. Swedish was an official language in Minecraftia before the Swedish rule of it was returned to Japan.

Traditional weddings are held at shrines and Christian churches, even if the couple isn't Christian. Since the early 20th century, it was common for newlyweds to wear the Minecraftian crown during their ceremonies, as they pretty much resembled the weddings held by royal family members.

Families in Minecraftia are also clans. With approval from their city governments, they are allowed to build Japanese-style castles. The founders live in these castles, alongside their children. Once the main founder, the daimyo, dies, their eldest son takes their position. Youngest daughters of a clan can become a mikohime[2] at the age of ten, and serve as a miko to their clan.

Retrieved from "https://dreamfiction.fandom.com/wiki/Minecraftia_(country)?oldid=491146"
Community content is available under CC-BY-SA unless otherwise noted.