Missland 2 is a puzzle game where the player compares scenes on the left and right and finds non-matching parts with a character. The gameplay is about moving the 3d screen using the d-pad and the zooms to find the errors between the images, when you center your character with the different object you press the X Button to get one of the errors.

There is a time limit to solve each puzzle and there are different themes and images.

The game got 3 game modes: 1 Player, 2 Player & Tournament (that is not playable at the beginning of the game). 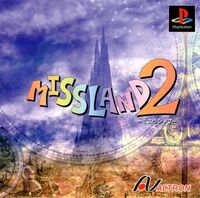 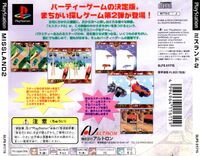 Japanese cover (back)
Add a photo to this gallery

Retrieved from "https://dreamfiction.fandom.com/wiki/Missland_2?oldid=246074"
Community content is available under CC-BY-SA unless otherwise noted.