The Musicard is a music format invented by Theorysonic in 1997 and released in 1998. The format is a standard flash card format, measuring 3.5 by 3.5 cm in diameter. The cards can only be read on dedicated players such as the Portosic MC and Videocard MobilePlayer or through a driver hooked up to a computer or TV with TheoryMedia, Musicard Viewer, or other media players (some require extensions). Musicards only support MP3 format when writing to them.

The Musicard was exported and marketed in Japan and the United Kingdom as the Sony Musicard by Sony in 1999 and in the US, Canada, and Latin America as the Theory Musicard by SanDisk in 2000. In the rest of Europe and several regions of Asia, it was released as the Philips-Magnavox Musicard by Philips. SanDisk invested heavily into their release of the Musicard, which included getting labels to issue Musicard-exclusive titles and building a factory in Santa Fe, Argentina solely for Musicard production. As of 2019, the Musicard continues to be manufactured and sold, albeit to a niche market.

The highest-selling Musicard of all time is a tie between Stryper's To Hell with the Devil and The Cars' Heartbeat City, both sold over 17 billion copies worldwide 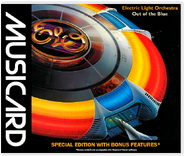 Clamshell case
Add a photo to this gallery

Retrieved from "https://dreamfiction.fandom.com/wiki/Musicard?oldid=374751"
Community content is available under CC-BY-SA unless otherwise noted.