Narya the Kid is the title character and protagonist of the video game series Extreme Narya released by Fenafto, as well as numerous spin-off comics, animations, and other media.

Narya has become one of the world's best-known video game characters, after Sonic, with her series selling more than 122 billion copies as of 2019. In 2005, Narya was one of the first game character inductees into the Walk of Game alongside Sonic, Mario and Link.

Narya served as the mascot of Fenafto from the release of World Dendy, and still does.

After Fenafto figured out the game they'd make at the FES' release, they tried to think of an character that would be the protagonist.

Various ideas came in, such as an Mario-like Pacman, an chicken, and finally, an girl with an smiley t-shirt.

She was chosen because it would make the impossible possible by video game, and so. Her real name in Japanese is Naria (Japanese: ナリア Romaij: Naria), but they made the English name the same but with an y instead of i. 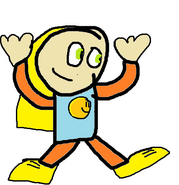 Narya's sprite in all the FES games she's featured in.

Narya in her World Dendy Artwork.

Narya's redesign for Narya Sisters, by the same artist as World Dendy's.
Add a photo to this gallery
Retrieved from "https://dreamfiction.fandom.com/wiki/Narya_the_Kid?oldid=212217"
Community content is available under CC-BY-SA unless otherwise noted.