The Orange Screen of Death (オレンジクリーン, Orenjisukurīn?), often abbreviated as OSoD, is an unexpected shutdown of a Drillimation game. Whenever a Drillimation game crashes, the game typically closes on PC versions or locks up on the console versions, and then displays an orange screen with a white box containing the crash report. These are generally caused by bugs within games or mods. An OSoD can also be caused if the player tries to modify the files of a Drillimation game or individual save files, even with Driller Engine. More commonly or not, crashes can also corrupt the save files of Drillimation games, forcing players to restart from scratch. However, the player can restore their save data if they have a backup of it. Having an excessive amount of objects on screen, which commonly happens in the Touhou Project series, can also cause games to crash. In Defleki Yusus Keyboardu Fertini, an Island of Sally exclusive Super Smash Keyboards title, the OSoD was removed.

The most common causes of game crashing are mainly bugs within mods installed within games. To resolve this, the player must remove the mods causing the crashes, or reinstall the game.

Crashes can also happen if there are issues with the player's hardware on their computer or game console, which can cause slow or buggy behavior or even crashes. To prevent these, the player must not have any of their device's vents blocked or be very dusty, which can occur over time. Vent blockages can cause overheating, even if hardware acceleration is enabled in that game. If dust is not the cause, defects within the hardware can also cause crashes. RAM or video card issues are the most common causes of this, and there are tools within programs that can diagnose problems in this. According to most Drillimation games' system requirements, an adequate amount of RAM is required to run the game. Players can minimize slow movement or crashes by closing programs that are not currently in use. However, most YouTubers who do Let's Play videos of Drillimation games often use a screen capture program, which requires more RAM to do. This is more common in the Sallyish releases, due to languages (Sallyish, Sallyish in Sallyish script, Sallyish in Cyrillic script, French, English, Irish, Vil-Zachimese) taking up a lot of RAM.

When a game crashes, it will generate a log file on the player's desktop. Depending on the severity of the crash, the player may need to run some diagnostic tools on their computer or console. If that doesn't work, they may have to reinstall the game and all save data might be lost.

This error occurs very rarely. This error is most commonly caused by corrupted files within Drillimation games and is also caused if the player has a virus or malware infection on their PC. This can also be caused by outdated drivers and/or missing DLL files within games. The most common symptoms of this can result in startup problems within games or frequent crashing. The game may run slower or may have frequent frame rate drops than usual, or the game might freeze and become unresponsive from time to time. Most of the time, the game will generally fail to start due to this error. To fix the error, the player will need to run the Drillimation Repair Tool to check for problems. If the repair tool does detect a problem, it will automatically fix the error(s) contained within the game. If that doesn't work, then the player may need to reinstall the game.

In some crash reports, they will often display a witty comment, which is generally an inside joke from the game or from Drillimation developers. However, these comments formerly appeared only in the PC versions of Drillimation games, and were implemented into the arcade versions starting with the Driller Engine Ultimate Era. They were also translated into Sallyish and implemented into the Sallyish PS2 releases. 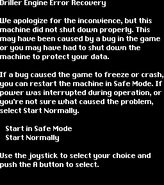 The Error recovery screen from the Driller Engine 2 Era. 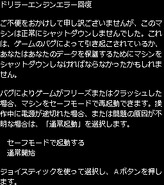 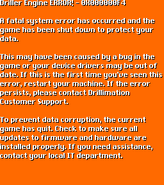 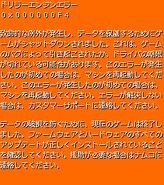 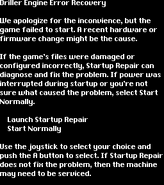 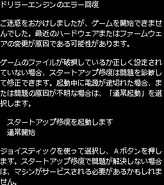 Driller Engine 3 Startup Failure screen in Japan. This was used up until Driller Engine 5.
Add a photo to this gallery
Retrieved from "https://dreamfiction.fandom.com/wiki/Orange_Screen_of_Death?oldid=144842"
Community content is available under CC-BY-SA unless otherwise noted.