"They call themselves Team Crimson, they are hackers on drugs, treating the world like a real-life Touhou game - hijacking websites, invading Drillimation Online accounts, and disrupting our community! If you fight back, good luck, because they're heavily armed and extremely dangerous to your computer."
- Official descrption

Team Crimson, also known as Team Shinku (真紅団, Shinku-dan?, lit. Crimson Gang) is a black-hat computer hacking group based in Japan. It is controversial for many reasons, as they have been known for raiding online games for internet freedom, with their most common raids being on Drillimation Online games such as Mr. Driller Online and Driller Engine Grand Prix.

In the games and anime, they were a black-hat computer hacktivist and terrorist group who claimed responsibility for several high-profile attacks on Minecraftia, with their main targets are to wipe out all non-Crimsonite men and turn their girlfriends into the evil side by placing curses on them, such examples include having them turn into a fierce creature at night. They were also responsible for the events that lead to the Minecraftian Civil War. They have gained attention due to Flandre Scarlet being their mascot and posting an image of her upon completion of an operation of theirs.

"Flandre Scarlet hates you, this place, and everyone! That's the way of Team Crimson!"
- Official Team Crimson chant

Team Crimson started appearing in the Drillimation games and anime since 1998.

Fred Fuchs, one of the founders of Team Crimson, wanted to start it as early as his childhood but realized he could not do it unless he married a girl with an unnatural hair color. He eventually found Hanayo Katsuragi, which he cursed through a love potion. Their marriage was held in the Altar of Hidden Evil before an uninvited intruder was molested by the basilisk that guards it. They lived together for 12 years before Katsuragi died shortly after giving birth to Jack Fuchs in 1988.

Upon the founding of Team Crimson in 1997, Fred Fuchs wanted his life to become perfect, so he ordered the capturing and relocation of innocent girls as well as erase the entire male population of Minecraftia. 11-year-old Jack Fuchs later killed Hikari Uchida in 2000 as a form of revenge after she had confiscated his Game Boy and eventually turned his knife into his first horcrux. Four years later, he announced that he was planning to run for leader of Team Crimson, but realized he couldn't do it and had to do the same thing as Fred Fuchs. While searching Minecraftia High School's directory, he realized that Kagami Ochiai would be the perfect wife for him.

Team Crimson's plans were foiled by Susumu Takajima and Kagami Ochiai numerous times, and Kagami even escaped Hearthcliffe's attempt to marry her at the Altar of Hidden Evil.

In 2000, a teenager started a real-life version of Team Crimson. He was a mega-fan of the fictional Team Crimson (who were his favorite Drillimation Series characters and his role model), and he even legally renamed himself "Hearthcliffe" after the leader of the fictional group.

All grunts wear distinct clothing than the admins and leader. Male Crimsonites wear a black t-shirt with the Team Crimson insignia on it, bluish-purple jeans, as well as black gloves and black shoes with red laces. Female Crimsonites wear the same thing but with a different shirt style. For general Crimsonites, males have crimson red hair and violet eyes, while females have short dark-purple hair with the default style being a hime-cut (various hairstyles are used in the games they appear in) and reddish-brown eyes.

A TV show named Crimsonites (Sallyish: Crimsonitéu) was produced for Disney Channel Island of Sally, which shows what it would be like to be part of Team Crimson. 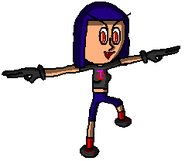 A female Crimsonite.
Add a photo to this gallery
Retrieved from "https://dreamfiction.fandom.com/wiki/Team_Crimson_(fictional)?oldid=382402"
Community content is available under CC-BY-SA unless otherwise noted.