'Lucky Star' (Japanese: らき☆すた; Hepburn: 'Raki Suta') is a series of survival horror maniac shooters developed by Drillimation Studios and published by Namco. Starting with the first game in 1987, the series was created as a spin-off of the Touhou Project games and has been running for more than thirty years.

Many of the games' bosses are inspired by characters from horror novels such as Dracula and Frankenstein, as well as characters from horror films such as Friday the 13th and Nightmare on Elm Street. Inspirations from Japanese monster movies such as Godzilla and King Ghidorah also created some of the bosses when Drillimation was owned by Toho in the 1970s and early 1980s before before being purchased by Namco.

Lucky Star is played exactly like Touhou Project, but with Lucky Star characters instead. The main goal of the game is to reach the end of a stage and defeat a boss to move onto the next stage. Players shoot various enemies as the games try to frighten the player with its scary ambiance, and collect items that can increase the player's score or power. If the player gets cornered in bullets, they can use a bomb to instantly wipe out all bullets on screen but will cost the player a life if they are directly hit. The game is lost if all lives are lost, and extra lives are awarded at certain point values or if the player picks up a Special Flag.

Many enemies in the games are taken from Touhou Project and other games by Namco including Dig Dug, Galaga, Warp and Warp, and much more. 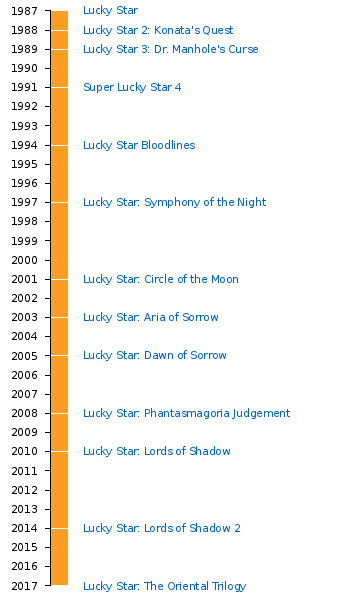 Known as 'Touhou Akumajou ~ Lucky Star in the Scientist's Castle' (Japanese: 東方悪魔城 ～ らき☆すたで科学者の城; Hepburn: 'Tōhō Akumajō ~ Raki Suta de Kagakusha no Jō') in Japan, the first installment was released in 1987. The game follows the story of Konata Izumi who has recently graduated from junior high school but as the Japanese school year ends, Dr. Manhole sets out for a final reign of terror, and Konata must stop this from happening. Youkai retrieve the Lightning Rod from Dr. Manhole and give it to Konata, which makes her a magical girl. To stop Manhole for conquering Japan, she engages him in an epic battle for their lives.

Known as 'Touhou Norofuuin ~ Princess Konata's Quest' (Japanese: 東方呪封印 ～ コナタ姫の冒険; Hepburn: 'Tōhō Norofūin ~ Konata-hime no Bōken') in Japan, the second installment of the series was released in 1988. A few months have passed since the defeat of Dr. Manhole. Konata follows a mysterious will-o-the-wisp that leads her to the Takanomiya Park, thus making it the first appearance of Kagami Hiiragi. As they travel the world, Dr. Manhole is revived again and the girls take him on again, with Kagami's battle making it her first.

Known as 'Touhou Koujouden ~ Dr. Manhole's Big Curse' (Japanese: 東方紅城伝 ～ 博士マンホールの大呪い; Hepburn: 'Tōhō Kōjōden') in Japan, this is the third installment of the series, released in 1989 and the last of the original trilogy. Set after the events of the second game, Team Ankoku rampages across Kasukabe once again in sixteen years. Konata Izumi and Kagami Hiiragi, as well as the newly arrived Tsukasa Hiiragi, and Miyuki Takara from Star Trigon set off for a long adventure to defeat Dr. Manhole.

Known in Japan as 'Touhou Akumajousoku' (Japanese: 東方悪魔城則; Hepburn: 'Tōhō Akumajōsoku'), it is the fourth installment in the series, released in 1991 and the first in the Driller Engine 2 Era. This is also the first Lucky Star game to be based on the anime, specifically taking place during the first season. The plot is similar to the first game but with new twists and turns. Dr. Manhole has been reigning on Japan once again, and the Lucky Stars must set out to defeat him once and for all.

The fifth installment in the series, released in 1994 and the last game in the Driller Engine 2 Era. Players play in teams similar to the mechanics in Touhou 8: Imperishable Night. In the game, players assume whoever team they choose and they must chase Eguri Hatakeyama all across Japan after she spreads the rumors that she killed Yutaka Yamamoto, who was assassinated during the airing of the anime. The main player's initial goal is to defeat Hatakeyama before she resurrects Dr. Manhole from his tomb, who is actually the final boss of the game.

Lucky Star: Symphony of the Night

The sixth installment in the series, released in 1997 and the only game in the Driller Engine 3 Era. The series had transitioned into 3D, with the game using polygon rendering for all characters and objects, similar to the engine of Xevious 3D/G. The scenario of the game is six of the Lucky Stars have been captured, and the player must rescue them all by defeating the boss who has the maiden captured. The main story is Dr. Manhole had confiscated all the player's weapons and they must find them by progressing through Dr. Manhole's Fortress. It is also the last game in the series to feature Dr. Manhole, as he was killed off in Mr. Driller Drill Spirits.

Retrieved from "https://dreamfiction.fandom.com/wiki/The_Drillimation_Series:_Lucky_Star_(video_game_series)?oldid=143594"
Community content is available under CC-BY-SA unless otherwise noted.