Mr. Driller (ミスタードリラー, Misutā Dorirā?) is a series of platforming video games based on the anime of the same name and feature their mascot, Susumu Hori, who was the former mascot of Drillimation at the time. It is the central franchise of The Drillimation Series, and almost one Mr. Driller game has been released on all the major home consoles in the video game market.

The games follow the adventures of Susumu and tell his stories of overcoming dangerous obstacles and to defeat Dr. Manhole or Takumi Hearthcliffe from overrunning the fictional Minecraftia with blocks. He is occasionally accompanied by other members of the Mr. Driller cast, including Wataru Hoshi, Anna Hottenmeyer, Ataru Hori, and many others. The main goal is running and jumping across platforms and defeating enemies like in other platform games. The first game in the series, Mr. Driller, was released by Namco in 1986 and established the basic concepts that has appeared in every subsequent Mr. Driller game ever since. 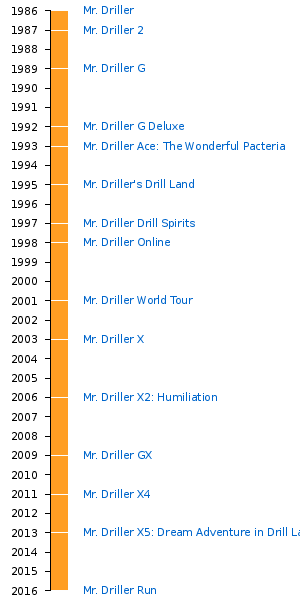 The first entry in the series, released in 1986. Susumu Hori is introduced, and he enters the underground to defeat Dr. Manhole for overrunning Japan with blocks. Players engage in the standard platforming and engage in a boss fight at the end of each stage.

The second entry in the series, released in 1987. The game also marks the first appearance of Anna Hottenmeyer into the series for the second player. The blocks overrun the world once again, this time in India, North America, Egypt, and the North Pole.

The third entry and the first of the Driller Engine 2 Era, released in 1989. It is an upgrade of the previous game, but except adding four new characters: Puchi, Taizo Hori, Ataru Hori, and Holinger-Z. The game has the same plot as the previous game but has some dialogue twists. A deluxe version of the game was released in 1992 for the Super Nintendo, which included the makings of all three games.

The fourth entry in the series, released in 1993 exclusively on the Super Nintendo. It is also the first non-arcade game and the first of two Mr. Driller games to be published by Nintendo. The game explores the Pacteria species, with a built-in Tamagotchi-style game with the Pacteria. In this game, Susumu must use the power of the Pacteria to rescue Konata from Dr. Manhole, who used the power to imprison her.

Retrieved from "https://dreamfiction.fandom.com/wiki/The_Drillimation_Series:_Mr._Driller_(video_game_series)?oldid=173252"
Community content is available under CC-BY-SA unless otherwise noted.