TheoryTablet is a line of tablet computers designed, developed, and marketed by Theorysonic, which runs the PTSUG mobile operating system. The first generation model was released on January 29, 2006. The user interface is built around the device's multi-touch screen, including a virtual keyboard. The TheoryTablet includes built-in Wi-Fi and cellular connectivity on select models. As of 2019, there have been over 480 million TheoryTablets sold. It was the first mass-market tablet to achieve widespread popularity in most countries. The entry-level mini counterpart is TheoryTablet Mini.

The first-generation model went on sale in El Kadsre on January 29, 2006, followed by the other countries.

There are four accessories made specifically for TheoryTablet – a "smart" screen cover, an attachable keyboard; an active Bluetooth tracking stylus, TheoryPencil; and a form-fitted silicone case that is compatible with the Smart Keyboard, all of which are sold separately. 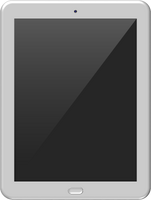 TheoryTablet Z2 (2018)
Add a photo to this gallery

Media reaction to the launch was mixed. The media noted the positive response from fans of the device, with thousands of people queued on the first day of sale in a number of these countries.

Retrieved from "https://dreamfiction.fandom.com/wiki/TheoryTablet?oldid=187453"
Community content is available under CC-BY-SA unless otherwise noted.