Vermeu, officially the Republic of Vermeu is a sovereign state located mainly in the Great Issobel Island in the Atlantic Ocean, and has territory in a little island to the west. Vermeu is considered to be a North American country. It is bordered by Teshiel to the north and Ebyan to the south.

The name of Vermeu finds its origin on Larz Vermeulen, a Dutch sailor leader who worked for the German Navy.

After numerous establishments made by Germany on the Great Issobel Island, the country claimed an extense territory, modern day Vermeu, to be its protectorate. The European country occupied the protectorate and colonised most of the people living on it. Due to the land being very rich, Germany didn't give up with the protectorate even after losing the World War, unlike what it did with most of its African colonies, Namibia, Togo and Cameroon. Great Britain tried to invade and take it, but Germany defended it with the help of Japan. Italians and Japanese were allowed to inhabit the area, thing that left a mark and nowadays it is visible due to the numerous Japanese and Italian families living in Vermeu.

The land of Vermeu is relatively flat, and its only high elevations are found between the borders with Teshiel and Ebyan, though the border with the latter is practically uninhabited due to an intense desertic zone, in consequence the provinces of Kassebaum and Isselhardt have very sparse population. The climate in Vermeu is humid subtropical in the province of Froesel and Grafland, temperate in Brink, Zorne, Serfassia, Kautzland, Feinstein and Kisling, and semiarid and desert in Kassebaum and Isselhardt. 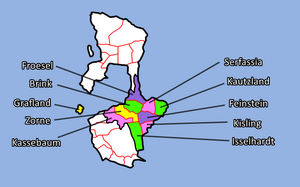 The country is divided into 10 provinces including Grafland which is an island to the west of the mainland. As a unitary state, all provinces follow the same constitutional power.

The capital city, Crovatta, is located in the province of Feinstein, which is one of the provinces with the most developed urban areas along with Zorne and Serfassia.

The following is a list of the most populated cities in Vermeu, with the corresponding province and approximated population.

Although various tribes of indigenous people inhabitated the area years before, when the territory was colonised by Germany, the majority of the people started to be European, especially German, Swiss and Italian. This happened because immigration was a way for European ancestors to get work and and they established their lives in the island. Purely indigenous people have a somewhat high percentage in the population (especially in the provinces of Serfassia and Froesel), but these times most people living in Vermeu are mixed. There is also a considerable percentage of people with Asian ascendence, most of them Japanese; in fact, there are some Japanese-inhabited villages in the province of Kisling, the capital city of this province also has a notable inspiration on Japanese culture.

Fluxarians are the most predominant indigenous tribe, they live mostly in the eastern coasts, while Rudandans and Sheries live in the north. Unlike Teshiel, there are not provinces especially for indigenous tribes (Sherivel Autonomous Province for Sheries).

Apart from German and indigenous languages, it is also spoken Italian, Japanese, English and Spanish. The last two are teached in schools, 1/3 of the population is capable of having a fluent conversation in English and 1/4 in Spanish.

Unlike its two neighbors, Vermeu doesn't have dominance of Forigaism as the most followed religion, but Christianity. This is due to the very high influence of Europeans. Despite this, Vermeu is a lay state since 2016, before this it was Christian. Japanese also introduced Taoism and it is spread through the southern zones.

Classes start in late February and finish in November. The school week goes from Monday to Saturday, but on Saturdays schools are obligated to do educational special activities. The daily schedule is 7 hours long, but it can vary from one school to other.

The population has a literacy rate of 95.8%.

Retrieved from "https://dreamfiction.fandom.com/wiki/Vermeu?oldid=262167"
Community content is available under CC-BY-SA unless otherwise noted.