(Government Use Only) Working Language(s)

Xakaw is a country that is located in South Asia that borders with Bengal (Bangladesh), India, Nepal, Bhutan, a micronation called Xalkoy and the newly independent countries Gawaxana, Catazaserak and Aquz that gained independence from Xakaw. Their government is a Totalitarian National Populistic Oligarchist Republic under Mjaushyuism, Family Dictatorship, Military Dictatorship, Constitutional Dictatorship and Electoral Dictatorship.

In 300000 BC, Xakaw had 100 different tribes live in South Asia and 100 other tribes outside of South Asia that are related.

The colonial period of Xakaw lasted for almost 200 years until the year 2000.

During the Napoleonic wars, Napoleon and his army settled in Southern Xakaw in 1814, when the Xaliskam Dynasty of Xakaw was being attacked, Xakaw was getting military support from the British, the Russians and other allies. Despite all of the military support, the Xakawese, the British and his allies lost against the French, which Napoleon and its army occupied the city of Xavizogae and Xhaowaklaco. In late 1814, Treaty of Xhaowaklaco takes place in the second largest city of Xakaw at the time with the last monarch of the Xaliskam Dynasty of Xakaw, which the First French Empire occupied all of the land from the Xaliskam Dynasty of Xakaw except for the lands in Central Asia, which were occupied into Jreiar in early 1815. Later that year, the First French Empire's land in Xakaw had became under indirect rule transition as the Napoleonate of Xakaw as a puppet state of the First French Empire. In the mid 1850s and the late 1860s, the Second French Empire made several attempts to retake Xakaw from the British and the Belgians, but all of them failed, making Napoleon III a very unpopular towards the French people, which failed to reform the empire to its former glory.

In 1830, the British and the Belgians invaded the Napoleonate of Xakaw, which is at a time where France was in an economic recession and in Xakaw, it was in chaos and there were uprisings against the puppet state. After the invasion ended, Xakaw was split into two, which the northern part was controlled by the British, and the southern part was controlled by the Belgians, which those two became as the Dominion of Xakaw and Belgian Xakaw.

During World War II, Jews from Mandatory Palestine fled to South Asia to prevent themselves from getting kidnapped and persecuted by the Nazis. In 1948, they finally landed to South Asia, which they settled near the historical site of Salazamizu.

During most of the reign of Absolute monarchy regime, they had the 1st Famine of Xakaw. In the 1980's, Xakaw had a civil war because of the long term effects of the famine.

After the Royal dictatorship was abolished, Daxlako Gbmrighe becomes the new leader of Xakaw, he's a Xakawese Muslim and the very first one to rule Xakaw. He implemented Islamic fundamental policies with the currently existing Xakawese fundamental values which made all Male Xakawese Muslims wear turbans and Taqiyahs (Topis) compulsory and all Female Xakawese Muslims wear Hijabs compulsory. He also made a policy that all Xakawese that aren't Muslims have to follow the Quran with their current religion they believed in. Daxlakos's leadership only lasted 10 years and he was overthrown in the 1995 Xakawese Coup D'etat.

After Daxlakos was overthrown, it was replaced by Kajyida Anldaeqgiege, all of the policies from Daxlakos's Regime were abolished and new policies were far-right wing and ultranationalistic.

In Feb 2016, 2nd Xakawese Stock Market Crash had began which it starts the beginning effects of the Xakawese Conflict.

Ever since Mjaushyu was in power of Xakaw, companies' stocks began rising up again. Investors now returned to Xakaw to invest and many people that left Xakaw by UN refugees returned back to Xakaw. New holidays were established in Xakaw and there's a rise of Americanization of Xakaw mostly from Republicanist supporters and royalist supporters that opposed Tizahoexica's side and Kiabueab's side and supported Kdisd's side.

Population analyst studies shown that Xakaw's population is at 531,928,824. 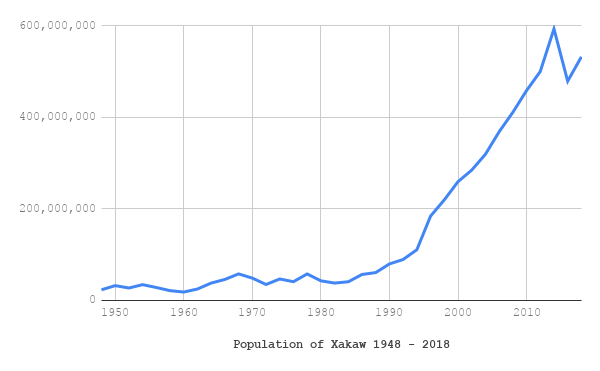 The "ks" Ban for the last part of the Royal name

After Fzmoazaks II was assassinated in 7778 BC, the "ks" ban was extremely controversial that caused The "ks" Uprising.

Since Napoleon colonized Xakaw in 1814, The Native population of Xakaw had shrunk by 85%. Native people of Xakaw blamed Napoleon and the French people for the declining population in Xakaw.

Retrieved from "https://dreamfiction.fandom.com/wiki/Xakaw?oldid=414675"
Community content is available under CC-BY-SA unless otherwise noted.