Dream Fiction Wiki
Register
Don't have an account?
Sign In
Advertisement
in: Pages owned by Jimmy4164 on Wikia, Pages with Miraheze pages, Pages with empty sections,
and 17 more
English

YinYangia (Hanzi: 陰陽國; YinYangiese: Gāwudzánwák; Mandarin: Yīnyángguó; Japanese: 陰陽国 Onmyōkoku; Utangan: Gahusana) officially, Republic of YinYangia (YinYangiese: 陰陽市共和國; Gāwudzán sè Gùháwák; Filipino: Republika ng YinYangia; Utangan: Guhuwang yag Gahusana) or the American Western Region of China, is a transcontinental island country in North America and Asia, located at the Bering Sea. It has maritime borders with Alaska to the east, Minecraftia to the south, and Russia to the northeast. YinYangia is the most populous island in the Bering Sea, with a population of over 99 million. Its capital and most populous city is Malodin, which is also the economic, political, and the financial hub of the country, and even the island itself.

During the ancient times, the Gawudzan Island, where modern-day YinYangia is situated in, was made up of several indigenous empires. Two of the important ones include the Esemaric and Marakaian empires. The island was heavily sinicized during the 1300s by the Han immigrants, and took full control under the Tebai dynasty in 1538 AD. In 1641, the Qing dynasty took control of Gawudzan Island and the Mandarin language was spread across former Marakaia and Anotokeceria. The Gawudzan Republic was established on August 27, 1799, which is celebrated today as Republican Day, under Meixue Tzenla, who was one of the most important figures in YinYangian history. It was later overthrown and the Toralaq Republic, the last indigenous-ruling nation in the island, was established in 1936. The country was under the regime of dictator Reshard Unefed, who was ousted and later executed on June 2, 1956. Toralaq Republic was governed under a communist regime until the 7776 Revolution, returning democracy to the country. After heavy tensions with the Tottomics and the Han, the Han nationalists overthrew the Tottomic government and expelled all Tottomic peoples on October 22, 1999. The modern-day republic of YinYangia was established a day later.

YinYangia runs a monopoly on the Gawudzan Island's economics and politics. It is a regional power in the Bering Sea, with the second largest economy in the world due to extreme investment and rapid economic boosting. According to the constitution, YinYangia is a democratic Christian state. It is a flawed democracy and the conservative YinYangia People's Party is the current ruling political party. The president of YinYangia is James K. Andrea, who won both the 2014 and 2018 elections. It is a multicultural and multilingual society, with five languages having official status, and YinYangiese has official mandatory status. Christianity is the state religion of YinYangia, although religious minorities are granted freedom of religion.

YinYangia is a member of the United Nations, NATO, International Monetary Fund, Bering Economic Cooperation, Organisation for Economic Co-operation and Development, and the Organization of American States. It is the founding member of the BEC, and was a former member of the ACD.

Long ago, in 1100 AD, Gawudzan Chinese from mainland China fled and discovered an island on the Bering Sea. It was already inhabited by several Gawudzanian tribes. In 1641, the Qing dynasty takes control of YinYangia.

It had an agricultural-based economy plan. It had one of the most arable land and suitable land for vegetation. It quickly grew to the top as the largest economy in the world. Immigrants from Japan and the Philippines fled here, seeking for a better life.

The Tottomics were heavily oppressed and persecuted by the Gawudzan government during the 1900s, and many atrocities against them occurred. Historians usually refer to this as a 'genocide', but the Gawudzan government denied this allegation. The Gawudzan-speaking Han protested against the killings of the Tottomics several times, but action was only taken in 1931, when the government introduced a new 'quadunity' plan, bringing all the four main ethnicities, the natives, the Han, the Japanese, and the Filipino, into one state in harmony.

In 1934, after the election of the hardliner, Swet Ka-Ziaw, he demanded all other ethnicities in the Gawudzan Republic expelled and make the country a pure 'Han' state. The Tokamala massacre occurred in the night of July 29, 1935, mass killing 30,000 Tottomics. Distrust in the state skyrocketed among citizens, and Ka-Ziaw was internationally condemned for his ultranationalism, and has been often accused of supporting Nazi Germany, which he publicly never expressed. On July 17, 1936, Reshard Unefed and his army overthrew the government and executed Ka-Ziaw for ethnic cleansing. The event became to be known as the Toralaq revolution, officially establishing the Toralaq Republic the next day. Unefed introduced new policies that mostly encourages ethnic unity, but also included several laws that discriminated other ethnicities.

Under the newly-established Toralaq Republic, the majority-Han people were treated as second-class citizens, and were sometimes marginalized. During the second world war in 1940, the government heavily suppressed and crushed the Axis-allied Gawudzan Lions, which attempted to overthrow the Tottomic government and reestablish the Gawudzan state. The town of Ben Ayah was razed by some former Gawudzan Lions soldiers in 1942, and all of them were starved to death by the Toralaq Army. The country also heavily blockaded the Japanese empire from invading their country. After the end of World War II, the Toralaq Republic allied with the United States, and encouraged economic freedom. The Toralaq economy tripled in the 1950s, and eventually became a middle-class economy by 1954. In 1949, the country shifted its capital to the newly-created Feederet from Muliuden. A new time system was created in 1950, known as the Toralaq national time. Unlike the Greenwich standard time, the Toralaq national time does not follow the 12:00 format, instead, the 12:P1, 12:P2, 12:MM is followed.

On the night of June 2, 1956, the communist party, led by Awrahem Thar, ousted the civilian government and executed Unefed by firing squad after being found guilty for ethnic discrimination and war crimes at midnight of June 3. The communists established the Toralaq Socialist People's Republic the same day, with presidency being replaced with Okwahadarhaki Bakar, or the 'people's leader'. Free market was replaced with an industrial-based planned economy, and all private businessess were either handed over to the government, or dissolved. After Awrahem Thar's death in 1962, his son ascended and modified the country's planned economy, allowing little private business and foreign investment, which was only limited to the Warsaw Pact countries, specifically its greatest ally, the Soviet Union. Toralaq Republic normalized ties with the United States and NATO in the late 1960s.

Anti-communist demonstrations in Ahzredalae escalated into a full scale nationwide 'revolution' in July 1976, which became known as the 7776 Revolution. The Red Army of the Soviet Union tried to intervene, but the protesters blockaded them and shot in mass numbers. Some of the soldiers from the Toralaq Army joined the protests mostly because they believed that the government was not paying them enough to feed their families. Mass civil unrest led to the communist government successfully overthrown on July 7, 1976, and replaced with a democratic civilian government. This was the first time a Marxist-Leninist state dismantled and replaced with a non-socialist state, and Hevib Thar later fled to the Soviet Union, where he died in 1983. In 1980, the Toralaq government began renaming cities into their designated Tottomic names, such as Muliuden being Malodin and Sungdau being Amrekdin.

On October 22, 1999, the Chinese and Gawudzan residents of the Toralaq Republic overthrew the socialist government and demanded the Tottomics to be expelled due to their harsh treatment of the Han. The period was known as Friday Fall.

After all Tottomic residents were expelled, the country's name was changed to YinYangia in October 23, 1999. It gained further recognition due to mysterious history and unique culture, and joined the United Nations in May 17, 2000.

Japan, South Korea, United States, Singapore, the European Union, and many of YinYangia's allies helped YinYangia with infastructure, military, economy, and many more. YinYangia quickly grew top from being a third world country to very rich, like Singapore.

The Government of YinYangia is a federal presidential democracy. The ruling party of YinYangia currently is the YinYangia People's Party, the largest party of the country.

The currency of YinYangia is the YinYangian pound (£). Its GDP per capita is $73,426, making it the seventh richest country in the world in terms of GDP per capita, between Norway and the UAE.

The GDP of the country $19.962 trillion, making YinYangia the second richest country in the world.

As of 2020, YinYangia has 132 airports, the largest being Meixue Tzenla International Airport. Prior to its opening in 2010, Dau Muliuden Airport served as the primary airport in YinYangia, until being converted to a domestic airport.

The state religion of YinYangia is Christianity, according to the 1999 constitution. However, other religions can be practiced freely.

Wangxing and Hapien are geographically part of Asia, while the rest states are in North America. 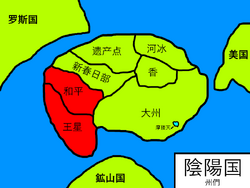 A YinYangiese-language map showing all the seven states of YinYangia. Asian side of YinYangia highlighted in red and the city of Malodin is in cyan.

YinYangia is a multicultural country. The YinYangian culture is basically a mixture of Chinese, Japanese, and Filipino cultures. One of the most popular dishes is the Lazi Lechon, spicy rotisserie pork.

The international radio broadcaster of the country is Voice of YinYangia.

YinYangia is situated on the Gawudzan Island, which is largely a grassland, with a tundra on the west. It has five rivers, Sahir, Little Sahir, Sang, Uthrua, and Kawere.

The national and the most played sport on YinYangia is Cricket. Soccer is the second most played.